All my fiction explores how the past interacts with present, its effects in our every day lives. As one of my characters thinks to herself, our past meshes with our present at every waking moment and there’s no way to separate them out.  It’s not just how our past affects us but how we fight against it as well.  These underlying tensions exist in all my work.

I have two pieces of writing published under my own name, my first novel, Past Secrets, and a novella, China.  Past Secrets was published in 1997 by HarperCollins when it won the HarperCollins Fiction Prize for that year.  China was first published in the Australian literary journal Meanjin, Vol. 66.1, Love, Sex and Desire, April 2007, when it won the Meanjin Novella Prize, and later in an anthology called Love & Desire published by Five Mile Press.  It was twice broadcast as the Australian Broadcasting Corporation’s Radio National daily book reading.  Both books are available as paperbacks on e-bay or from ABE Books.

In an old house that she’s just bought in inner Sydney, Jocelyn finds a an elegant black satin dress still in its original wrappings with the remains of a faded and dried rose placed on the tissue paper.  The dress appears to have never been worn.  The handmade label identifies it as made by a seamstress for an individual client many years ago, just after the end of World War II.  In setting out to find the now elderly seamstress, Jocelyn uncovers an ancient and terrible crime which reaches into the present and places her in great danger. 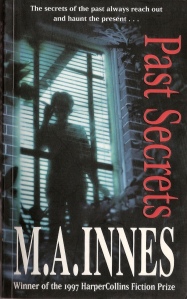 Black and soft, the dress slid to the floor in front of her. Jocelyn picked it up and smelt the faint odours of stale air and camphor caught within the seams, felt the coolness of the fabric as it slid snakelike through her hands. She took it by the shoulders and shook the black satin out to its full length at mid calf. The décolleté and sleeves were embroidered with flowers of fiery jet, the line of the dress shaped hourglass to the waist, then smoothed against the hips for the skirts to flare slightly as they fell. She turned in a circle, as if the dress was her dancing partner, and saw the skirt twist delicately to follow her.

Elegant, oh, so elegant. But what was this doing in a suitcase on the topmost shelf of a dirty cupboard? The top shelf doubled as a manhole into the roof, the suitcase had been pushed back into the roof cavity as if to hide it. She had dislodged thick sponges of dust as she pulled it out. As she flicked the case open, she saw the brightness of a white box inside, a spray of silver and gold flowers painted on the lid. The dress itself was wrapped in white tissue paper and something that might once have been a rose in cellophane had been placed in the box along with it. The flower crumbled into fragments as she lifted it out. The suitcase held nothing else except a few old, anonymous clothes.

She looked in the skewed mirror of a broken wardrobe where the door hung crazily from one hinge and held the dress against herself. Studied the white skin of her own fine-boned face against the black and silver cloth, the massed handfuls of her red hair in disorder around her shoulders. Her grey-blue eyes looked back at her. Thinness. She was still too thin; the mirror showed the upward curve of her cheekbones and the paleness of the skin about her forehead with its faint dusting of freckles. The wearer of this dress must have been just as slender, just as tall. The dress would fit her almost exactly: under crystal lights she might shimmer in this dress. She smoothed it down against her body, felt her hands stop just at her breastbone.

At which point the illusion faded.

She folded the dress away; looked around the ugly room and thought: Whatever will I do with this place?

In China a middle aged woman looks back on her life: her happy childhood, her parents’ loving marriage, and her mother’s deep conservatism. How this split them apart for many years and that a final reconciliation was only made possible after death.  It is a novella about the barriers we place between ourselves and those we most love and how the simple domestic things of life carry a meaning far beyond their every day use.

In 1963, when I was twelve years old, my mother bought a complete dinner service of Lady Carlyle china from the David Jones store in Market Street. Like many of my memories from those years, the look of that china has the bright, almost surreal clarity of a vivid dream in my mind. Its pure white porcelain was decorated with flowers so pink and blue they looked like fairy floss, while its borders were a broad pinkish-red damask pattern edged in gold. There were no such things as credit cards back then and my mother bought the china on lay-by. It took us months to pay it off. Choosing it was as tortuous as buying it. For weeks beforehand my mother studied brochures and magazines, then spent an afternoon looking at the china on display in the store. ‘Why don’t you meet me in town after school, Lisa?’ she said to me on the day when she was going to take the plunge. ‘We’ll go and buy it together.’ It was February, a Friday, and I had just started high school. I met her at the bus stop in York Street. She had put on what were almost her best clothes. Together we hurried to David Jones, both of us filled with a barely containable excitement.

The set had to be ordered in. The woman at the desk spent some time telling us the history of Royal Albert bone china, how their designs were inspired by the idea of an English country garden, especially the rose. ‘Lady Carlyle is very popular,’ she said and immediately I felt my mother relax. She was certain she had made the right choice. While they were filling out the forms for the lay-by, I went and looked at a piece of Lady Carlyle they had on display. There was a whisper in my mind that I did not like it. It was too fussy, too flowery. Nothing would have made me tell my mother this, I could not have disappointed her. When she had finished at the desk, she came looking for me.

‘I think it’s lovely,’ I replied, and almost believed it.

‘Why don’t we celebrate? Let’s go to Cahill’s. We’ve got enough time before the bus goes.’

That day in Cahill’s Restaurant my mother and I sat in a booth and shared a slice of cake, more like two schoolgirls than mother and daughter. She had ordered some extras, which had added to the price: a teapot, a creamer and a sugar bowl. ‘The teapot looked so elegant in the brochure,’ she said, ‘I had to have it.’ I actually clapped my hands for joy. I was as happy for her as I could have been for myself.

After that, every time my mother put some money down, I met her in town and we did it together. Then we always went to Cahill’s. We would look at the growing pile of receipts stapled together and work out how long it would be before we could take the set home. ‘Next week, Lisa,’ my mother declared one day.

The Saturday morning we went pick up the china it felt almost as if we were going to a wedding. Watches were checked and the house carefully locked as if we would be away for a long time. My father drove us into town and parked in the loading dock at David Jones. With the help of a storeman, he loaded the box of china into the boot. My mother watched their every move. Back home, she held the front door open for my father while he carried the china over the threshold.

My mother had put a lace cloth on the dining-room table in preparation for this moment. Once the box was opened, she took each piece out, checked it for damage, and then laid it on the table as if she were giving a dinner party. It was perfect, there was not a chip or a crack to be seen. Then she turned and smiled at my father, a look of fiercely satisfied joy on her face. With a single arm he hugged her around the waist and, very quickly, kissed her. Rarely did I see him touch her at all.
Back to top 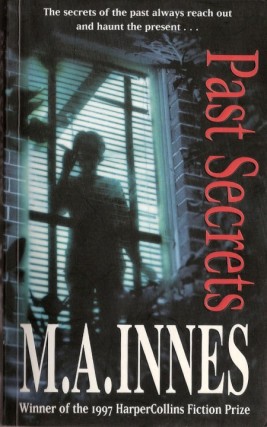